I’ve decided to not completely be obsessed by my own event… so in the links below, you’ll find some other suggestion of events in Brussels with a little comment !

And now, let’s be selfish and proud of it!

I’ve already told you that I’m co-organizing a street art event at La Bellone. Let me explain a bit more about it!

First of all, why did I accepted the challenge, knowing that I have absolutely no experience in curation nor organising events?

First of all because of the venue: La Bellone is a 17th century building, hidden in the courtyard of a more modern one, right in rue de Flandre, near Sainte Catherine. 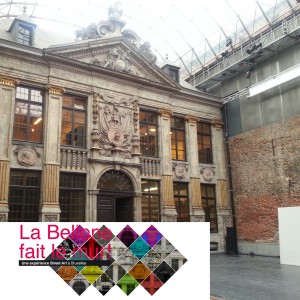 And if you have met Barbara (La Bellone Director) and Mesh (who has strong experience on organizing events), you will want to work with them. I felt that during our fist meeting and as the organization goes on and on I’m even more convinced about this nice collaboration!

The second reason is because I love street art (yes, life can be simple sometimes!)

And finally, if you had ever take a look at my resume, you’ll notice that I did 1001 different jobs in different fields (paid or volunteer) as I’m curious and drilled only by my instinct and pleasure.

So I thought to myself that experiencing the curation of an event in those conditions might be a good thing to do in a lifetime. I also see it as a nice way to make people discover a fantastic venue in Brussels in an other way than my articles.

And finally I wanted to show something else about street art….

Those last years have seen the street art movement being a trend: you can see that marketing services and advertisers are using street artists ; some events who has nothing to do with the cultural scene include a street art touch…

What do have those things in common? They tend to like only a certain aesthetic of street art. Mainly the graffiti design.

Graffiti is part of the movement. Like Documentaries or Thrillers movies are part of Cinema.

So street art is way more than just graffiti: I love it too, but not only that.

You have a lot of various artists, with different voices, techniques, worlds… That’s what I wanted to show. So I contacted some of my favorite artists. Believe me: I love many more but I had an idea of what I wanted and what I didn’t wanted.

I called Obetre because this guy has a point of view about the use of public space. I loved reading on his website the section legalize graffiti. When I first saw that, I was stucked and thought that the guy is worth to meet and talk to. And all the works he’s done make you thing.

I asked Ognev to join: because many times I was amazed by the little and simple ideas he has who makes the city more beautiful and green. It was natural to include his friend Solo Cink who has strong graffiti roots, but while working togethere with Ognev is experimenting other techniques where you can still tell that the guy have been into graffiti!

Same goes with Eyes-B : Graffiti is about writing letters. He’s not doing that anymore. But still you can feel the movement in his drawings… Like the letters are there, but not. Dancing, flying away, leaving behind only the colors and energy.

I wondered who’s the guy who was drawing the eyes in the walls of the city. I found his pieces of art mysterious and I always felt weird while catching those eyes. Thanks to Yves Calomme (who helped contact few other ones), I was able to have a name and a phone number. Eric (Hikups) Vanuytven is now into many different things.

I talked with him and it was obvious that he had to be part of it! He talked to me about the trance he’s into when he was working in the streets thanks to the sounds of the city and the wind and the people walking by and said that he wants to give a similar feeling to the people who will visit the exhibition.

I asked Tamar Kasparian to join the adventure too. She’s not a street artist, but it was for me natural to have her being part of it, as the event is not 100% street art, if you look at its definition.

The street art is define as being an art in the street and illegal. So it has a location condition and a legal condition to describe it. But no artistic definition at all. So you can imagine that I don’t strongly agree with that definition, even if I’m not (yet?) able to give another one.

Anyway, I believe that having Tamar who has strong connections with the street art scene and the contemporary art scene will be a nice addition to the panel. Because, one of my secret goal was also to make the people get to know each other and collaborate for this project but also for any future project they will be part of and will be gentle enough to invite me in!

It’s thanks to Tamar that I had the contact with FSTN from who I love the drawings in the city… I was immediatelly convinced to contact him.. he’s giving a little sacractic touch to the exhibition and I love it.

As concerning Benoît Bunzen: I called him because I stumble upon his profile a few months ago, where you can see very few pictures of his work… I was curious. I can tell he has a talent but yet, I couldn’t see many of his work nor in the streets nor online.
When we met he told me he was very surprised I knew him as he’ve been working in the solitude of his own studio for months now and he’s always under the scope and only known by some few people in the street art scene.

I told him that was exactly the reason why I wanted to have him in the project: I love his typography and I really believe that everyone who’s talented deserves to show his work.

We all know some names of artists, but the thing is that – as everyone knows them – everyone calls them! and you see from event to event the same work made by the same people. Don’t get me wrong: I love their work and they deserve it, but I just believe that many other artists out there deserves that too.

Anyway, you have the names of the artists, and you even have the reason why it’s them in particular.

They are preapring ambitious and amazing artworks.

It’s an experiment for La Bellone as it opens its door to a different type of artists they use to welcome… That’s why we don’t say it’s an exhibition, but an experiment and the artists are also adding a touch of experience for the public to live…

Come and see by yourself!

A new bar in Flagey? No a “living space”: where you can do way too many things to be true.. curious to find out if the programm will last that full for long… (for the bar itself, I’m sure it will be a success)

If you’re looking for an alternative event, this festival of various style of music would be your first choice!
You’ll disvover a Christmas song album a bit, well, different!

Who said that rock was not a girl’s thing?
Le Rock : les femmes savent pourquoi !

Do I have to say it again why you should come?
Dois-je répéter pourquoi tu dois y aller ?

Kwak is offering us a mix with some of his selection of the best tracks of the year.
Kwak nous offre un mix avec une sélection de ce qu’il considère les meilleurs morceaux de l’année